For a musician who has most often been lauded for his lyrical storytelling, making an all-instrumental guitar album may seem like an odd choice.

But that's just what Brian Cutean (aka Brian QTN) has done with "Guitarred & Feathered," the new CD that features the Oregon-based troubadour, one guitar and a whirlwind of sound.

"I know it's not what people expected, but I felt like I wanted to stretch and do it," Cutean says by telephone from Chicago Heights, Ill. "It seems like we've entered a part of history where everybody's words, opinions and thoughts can be published instantly. Sometimes that's too many words even for me, someone who loves words."

Cutean, who has regularly stopped in Southwest Michigan during the harvest season for the past 10 years, will bring his new instrumental works along with his popular lyrical tunes to South Haven on Sunday when he plays Foundry Hall.

"I've been making instrumentals for more than 20 years," Cutean says. "I just didn't put all of them on an album before. Sometimes I get wrapped up in wordplay and cleverness, so I wanted to make something that was 100 percent universal; to play music that was in my heart that everyone could get because there's no language limitations."

Born and raised in the Chicago area, Cutean says he became enthralled by the urban blues and acoustic folk scene of the 1950s and '60s that came through his transistor radio.

"You know that question, what was your first motor skill besides feeding yourself?" Cutean says. "Well, mine was putting little orange and yellow plastic records on a windup record player at 2 or 3 years old. Then I got my first transistor radio before I was 5, and you just can't do that to a kid without having serious repercussions."

Cutean got his first guitar at age 10, he says, in response to The Beatles and the garage-band scene, but didn't take to the instrument until he was 12 or 13. By the time he turned 19 he had left for Austin, Texas, where he spent the next 13 years playing that city's burgeoning music scene. He became a favorite at the Kerrville (Texas) Folk Festival in 1980, and has appeared at the Oregon Country Fair every year since 1988 after leaving Texas for the Pacific Northwest, where he now makes his home.

His first album, "Lubricating the Species," was released on vinyl in 1988, followed by "Is As Does Is (1996), a bare-bones live-in-the-studio guitar, voice and harmonica set that is still lauded by audiophiles, "Parakeetfishhead" (1999) and "Hearthearthearth" (2004).

"Career choice is a funny thing," Cutean says about his musical odyssey. "It reminds me when The Roches were on NPR and Neal Conant asked them, 'When did you decide you'd start making a living at this?' And Terre Roche, after 30 years in the business, said, 'We're still waiting for that to happen.' It's a music thing. I don't really know that I actually decided it, it's just something I've always loved doing. I feel privileged that people like to come to my concerts and like to buy my recordings and that this has been going on for almost 30 years. I think that's pretty amazing."

Although Cutean hints at settings with the titles of such tracks as "Tuned (To Her Piano)" and "Theme from Handpainted School," he says "Guitarred & Feathered" offered a different challenge to his typical songwriting style.

"I think in some ways I still focused on the story, only I didn't tell it with words," Cutean says. "I found something on the guitar I liked and went with it. Songwriting to me is still a mystery. Every time I write a song it's like I never wrote a song before. I still have to get out of the way and find out what it's showing me."

Although Cutean is proud of the all-instrumental album, he says he couldn't imagine not using music to tell stories of a certain place, in a certain time.

"I think storytelling has to be the world's second oldest profession," he says. "In the troubadour fashion you pick up a story from over here you pick up a song from over there. You notice what's happening in the world around you. You take a big breath and hopefully it all makes sense at the end of the evening."

That, Cutean says, is something he feels compelled to do, even on the days he feels a little like Terre Roche.

"People always want to know if I'm making a living in music," Cutean says. "The answer is I have a life in music. It may not look like anybody else's life. It may not be the most lucrative existence in terms of keeping the wolves away from your door. But I wouldn't trade it for anything." 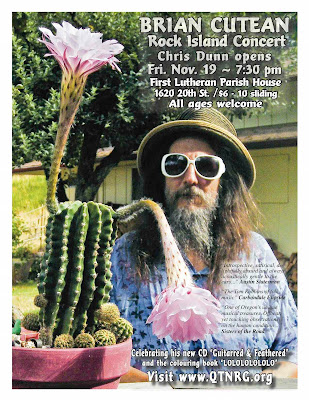 Come on out for a QTN concert in the Quad Cities area. The venue is in Illinois at the Rock Island First Lutheran Church Parish House, 1620 20th St and the concert is Friday November 19 at 7 pm.

This is my third year here and it's a wonderful warm room with many friendly folk. Chris Dunn is doing the opening set honours and he is very entertaining and energetic too.