Back in Oregon! Time for a two city tour with Dick Weissman 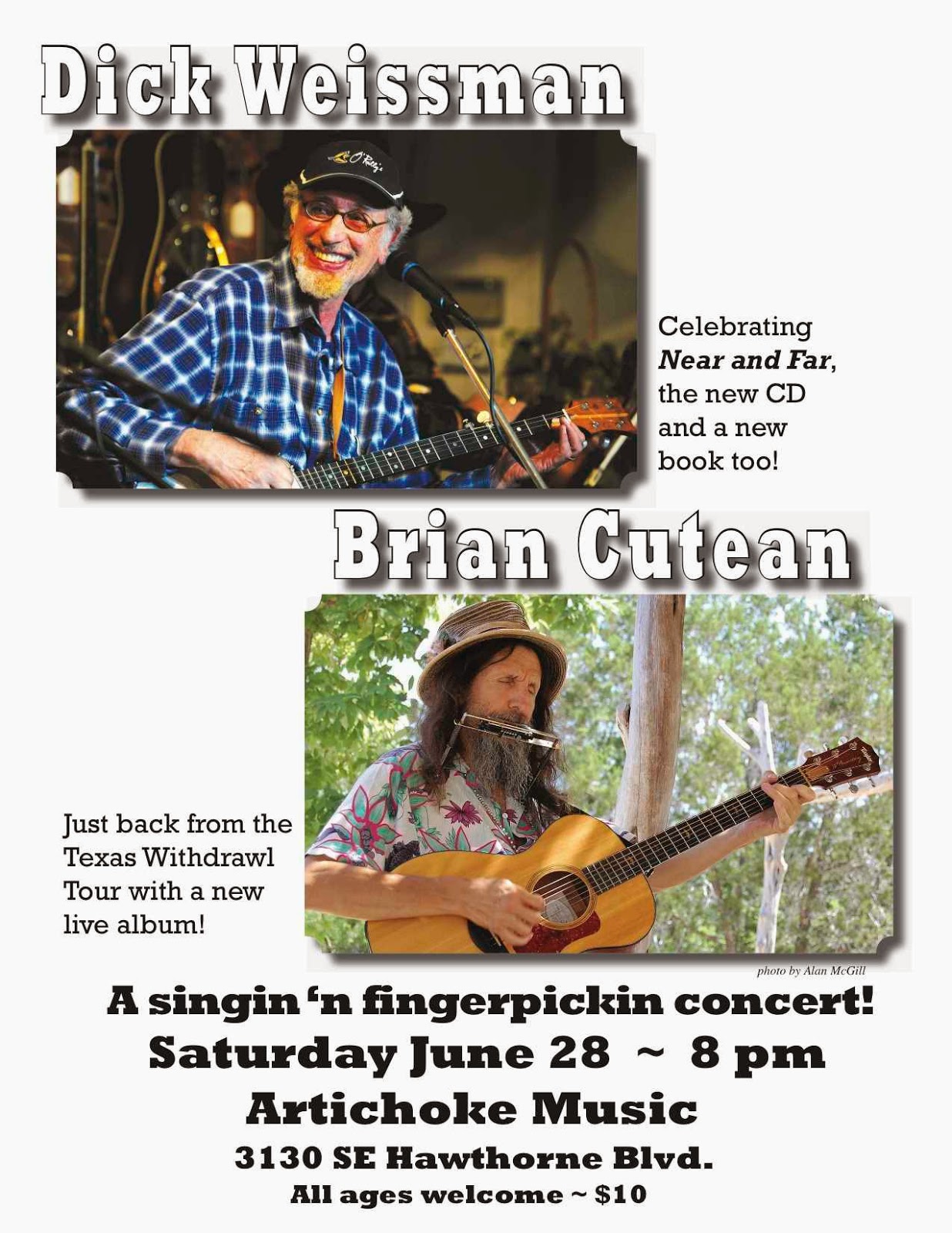 Just back from Texas boy, I'ma tell you whut. I've got two fun concerts coming up back to back with Dick Weissman; a mentor friend performer who has been doing his musical work as a one-of-a-kind, well-traveled musician/author since his early days performing with The Journeymen (during what Utah Phillips called “The Great Folk Music Scare of the early 1960s”). He has continued to be prolific, inventive and non stop, with 9 solo albums, 18 published books 50 instructional books for banjo and guitar and countless classes, workshops and record productions. Weissman lived in Portland for the last 10 years and has since relocated back to Denver.

I'm just getting back from my annual Texas tour which included shows around central Texas and the 43rd Kerrville Folk Festival. Lotsa great folks and tunes along the way. 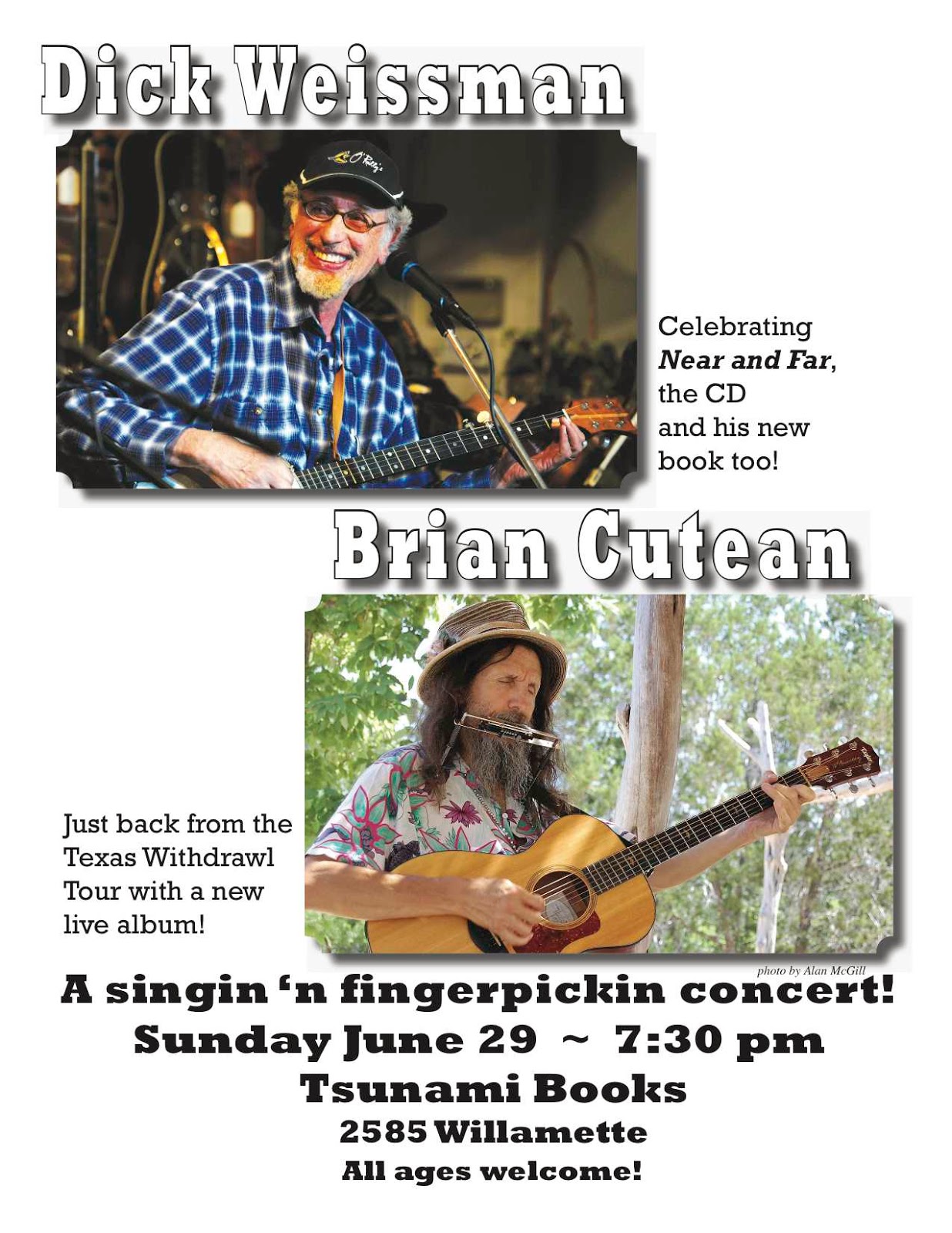 For the second year, Dick Weissman and I get to share an evening of string-picking and song-singing to celebrate his new book and my solar return next Saturday June 28 at Portland's legendary Artichoke Music and Sunday June 29 at the most wonderful bookstore in Eugene, Tsunami Books.

This unique musical evening will be a treat. If you'd like to see Dick with his old group, The Journeymen, from the pre-Beatle days of the Great Folk Scare, look them up on youtube. The other guys in the group were John Phillips (Mamas and Papas) and Scott McKenzie (If You're Going to San Francisco) and Dick is the surviving member.

This year will be my 26th year of playing the Oregon Country Fair and I'll be sending my Fair schedule soon.

See you all suddenly!
bq
Posted by QTN and Mr. Roldeebee sez: at 11:28 AM No comments: 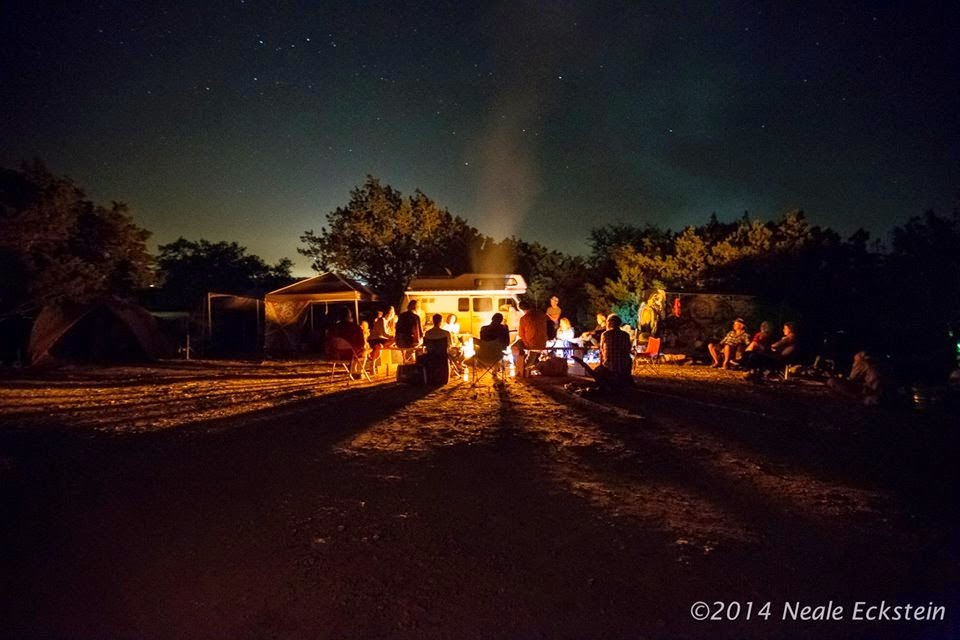 Oh what a most splendicious and very full time at the Quiet Valley Ranch and this year's Folk Festival! Many songs were exchanged, many new stories told and plenty of favourite songs, lotsa late nights at Crow's Nest and time with amazing beings. This late night amazing picture from a Crow's campfire was snapped by Neale Eckstein. The music is there too but you woulda had to been there; it remains etheric, intrinsic and morphogenic.

With less than a week of Texas left in me for this year, here are a few more places you can come hear QTN songs. Haven't slept much the last month but I'm-a rarin to go and looking forward to all these fun gigs.

With me this year is a new CD culled from 25+ years of live performances with the QBand at Oregon Country Fair, called QTNTFYOCF. The sale of it is helping fund mixes and masterieng for a new QTN record I've been recording this winter and am mixing at the end of this month. Every little bit helps to make this new one come through.

See you soon at one of these.

••• TANGLEWOOD HOUSE CONCERT – SAN MARCOS •••
with IKE EICHENBERG!
Saturday, June 14 • Potluck at 6 pm
Suggested donation $15
Seating is limited so RSVP for info to:
trweinberg@yahoo.com or joannagel@yahoo.com
Directions to the house concert will be sent.
A beautiful house for a concert
and a wonderful community of folks! 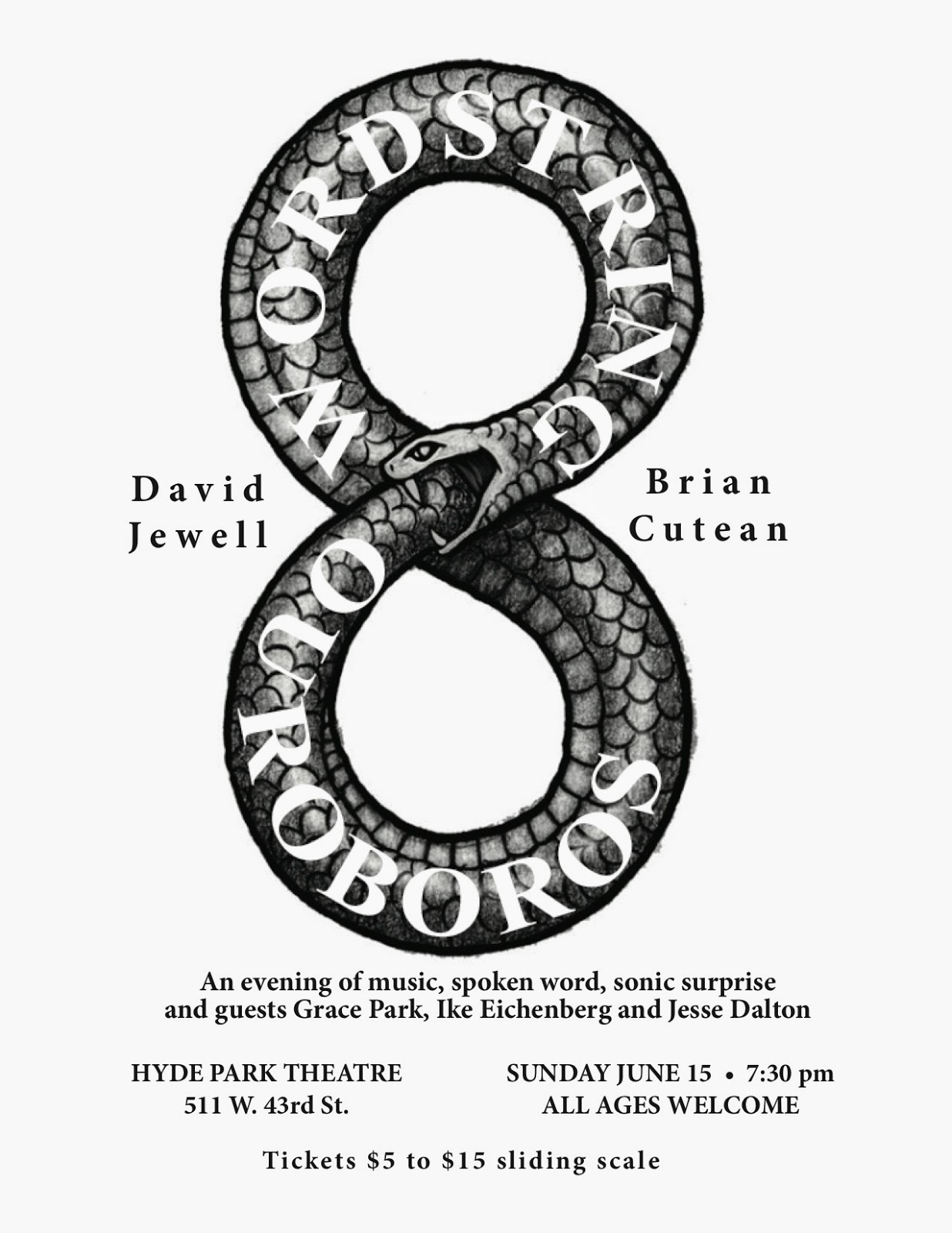 Posted by QTN and Mr. Roldeebee sez: at 1:38 PM No comments: