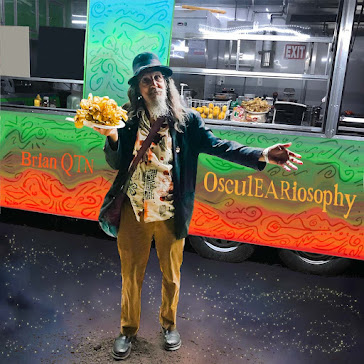 It’s the top of a new ear and already in process! The sap is rising like the rivers and the water is a-flowin.
There are four parts to this newsletter:
1. A Musing on the Water Tiger Year
2. New QTN album, OsculEARiosophy
3. The Petals by Al Grierson
4. Last Call for Kerrville Stories
1. Here we go round and round the big wheel that scrapes the sky. Moon was New February 1 and so a new Lunar Year begins. This time around itsa Watery Tiger following a heavy Metal Ox and it’s been observed that if the Metal Ox was a dam, the Water Tiger may well burst it as big energetic changes move further in. Water is yin, an element of ending and a preparing for something new. Other perspectives can be helpful especially in times like these.
Lots of deep breaths lately to begin again in this contracted winter with grace and fluidity.  Fluid-ditties are fun to sing even though there aren’t many gigs to play with real live people these days. I am digging into singing and guitarring, making new things to sing, finding older ones to re-sing. Real eyes sing.
2. I begin this new lunar year offering the heartiest thanks to all of you who’ve been preordering OsculEARiosophy  Preorders have helped mix, master, manufacture and send this new recording out into the whirld at large. Already it has gone many places and it goes out to many more round the world officially this month. Physical copies and digital files are there (even though we are in an odd time where CD players have largely gone the way of the Thesaurus.)
For those of you in radio, a separate sending is coming your way. If your email address has changed, please let me know asap. Radio folk can request digital downloads with metadata to get the music out faster (and less $ for postage).
I made a new recording last summer in my favourite studio here, with three vintage mics, six exceptional strings on an extraordinary Bayard guitar, ten fingers and a voice, and in one 6 hour session, ten songs were recorded. Order and stream tracks via my bandcamp page linked above and you can comment there or send words here. I’ve been told it’s a fun album to listen to on a cold day with a good cuppa something hot.
Two other important mentions:
3. The Petals, Al Grierson’s 3rd album, was released last year as a collection of unreleased gems he left behind and curated by me with a baker’s dozen of unforgettable Al tunes. The project was begun by Anne Feeney and I years ago, dear to our hearts and it all came together incredibly. Al's been gone 20 years now (and Anne left us a year ago) – his songs are eternal, so what’s a couple decades between friends? The other two albums he made while he stomped the terra firma are streamable and downloadable at his Bandcamp page here and all sales go directly to his two daughters.
4. 2022 is Kerrville Folk Festival’s 50th Anniversary and that means it's last call for stories for the Kerrville book Festfolk are writing together. If you’ve been procrastinating, the buzzer just sounded. I need them all as soon as possible to get it together and done by May Fest. Don’t wait to send your tales of amazing Kerrville happenings, camp origins, rain stories, Kerr-characters, raisin consciousness, rivers and weather, synchronicities and absurdities. Wax poetic and share your unbelievable experiences with the Kerr-munity and the rest of the outside world. Just collect your thoughts, type em up and hit reply to me here. If you’ve posted a great story on fb, copy it off the page and paste it into an email.
Here's hoping we have places to gather and sing again, festivals for the soul and other community hoopla. Hoping too we can come together as human neighbours and people with kind hearts to stop the animosity toward each other and focus on the important changes inevitably headed our way.
The oldest trick in the book is propagated by those with hubris and no hearts inflicting dualities into everything so folks argue endlessly about what they choose while their pockets are picked, and their rights and culture are exploited and stripped clean of its soul by those who stand to gain the most… it’s the oldest trick…
Thank you for being a part of this list, for your many letters, your enthusiasm and your ears. It is no small thing to me here on the hill over by the way and I hope to see you out there soon.
Lord Buckley said it best:
“The flowers,
the gorgeous, mystic multi-coloured flowers,
are not the flowers of life,
but people,
people are the true flowers of life
and it has been a most
precious pleasure
to have temporarily strolled in your garden.”
Your corn forest pundit,
bq
Posted by QTN and Mr. Roldeebee sez: at 1:22 AM